Magnificat, A Ministry to Catholic Women is a private association of the Christian faithful under the jurisdiction of the local ordinary. (Canon 305.2) Its purpose is to help Catholic women to open more and more to the Holy Spirit through a deeper commitment of their lives to Jesus as Lord and to impart the Holy Spirit to one another by their love, service, and sharing the good news of salvation. It thus provides opportunities which will foster a desire to grow in holiness.

Magnificat (pronounced Mag-nif-e-cot) is the verb in the Latin phrase “Magnificat anima mea Dominum” — “My Soul magnifies the Lord.”

These words recorded in Luke 1:46 are the beginning of Mary’s response to Elizabeth’s joyful greeting. The entire scene of the Visitation is the inspiration for this ministry, which adopts the name of Mary’s hymn of praise and the spirit of this Biblical encounter as its own. Following the example of Mary and Elizabeth, this woman-to-woman ministry within the Roman Catholic Church, attempts to generate a lively faith in God and His action in our lives along with a love for Mary and the Church.

What Does Magnificat Do?

We seek to minister to Catholic women by:
• sponsoring Magnificat Prayer Meals throughout the year, and
• providing other opportunities for spiritual growth, such as retreats, Bible Studies, Life in the Spirit seminars, and Intercessory  Prayer Groups. 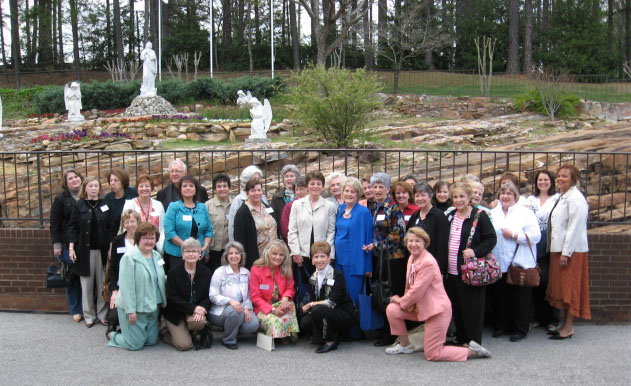 Magnificat – A Ministry to Catholic Women!

It has been exciting to be a part of this Magnificat Ministry to Catholic women which began on October 7, 1981 with the encouragement of the late Bishop Stanley Ott, and the late Archbishop Philip Hannan of the Archdiocese of New Orleans. It is canonically rooted in the church as a Private Association of the Christian Faithful. What started as a prayer meal for 200 Catholic women has become an International Ministry spread across the world with chapters currently located in the U.S., Canada, the Caribbean, Malta, Poland, and Africa. Its primary purpose is to inspire spiritual growth in holiness for women and to evangelize them to the fullness of faith. We believe it to be a response to the Second Vatican Council message to women.

“But the hour is coming, in fact has come, when the vocation of woman is being achieved in its fullness, the hour in which woman acquires in the world an influence, an effect, and a power never hitherto achieved. That is why, at this moment when the human race is undergoing so deep a transformation, women impregnated with the spirit of the Gospel can do much to aid mankind in not falling…”

The late Archbishop Fulton Sheen stated that “woman is the measure of the level of our civilization”. The moral level of any society is formed by women. Woman’s influence is powerful – for good or for evil. When a woman’s heart is captured by the Lord, she brings many to Him. We have seen that the transformation of a woman in Christ has had an effect in families, parishes, and the work place.

Pope John Paul II in his Apostolic Letter On The Dignity and Vocation of Women states that “many times in the Old Testament, in order to intervene in the history of his people, God addressed himself to women”. He continues to address Himself to women today, but unfortunately the world has effectively evangelized women more than the Word of God. Therefore, it is imperative that women become impregnated with the spirit of the Gospel so that they “can do much to aid mankind in not falling.” (The Council’s Message to Women – December 8, 1965) Perhaps Magnificat has been raised up for “a time such as this”. (Esther 4:14).

Magnificat takes its inspiration from the Visitation in St. Luke’s gospel, Chapter 1. After Mary was overshadowed by the Holy Spirit and Jesus was conceived within her, she runs in haste (92 miles) to her cousin, Elizabeth, who was also with child. Scripture tells us that at the moment Mary’s greeting reached Elizabeth’s ears, the child in her womb (St. John the Baptist) leaped for joy and Elizabeth was also filled with the Holy Spirit. At that moment, there was an explosion of grace and Mary sang the Magnificat. “My soul proclaims the greatness of the Lord, my spirit rejoices in God my savior…The Almighty has done great things for me, and holy is his name.”