We welcome you to the webpage of the Brasil Aruba Maria, Strea di Speransa (Mary, Star of Hope) Chapter. These are exciting times that we live in and Magnificat was begun in 1981 for such a time as this. There are now over 100 chapters throughout the United States and its territories and in many foreign countries.

Due to the coronavirus, check here periodically for updated information regarding future Meals & Events 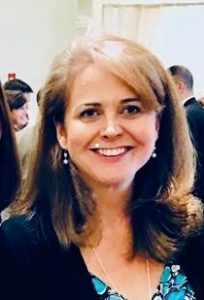 “Be joyful in hope, patient in affliction and faithful in prayer.”  – Romans 12:12

Laney was born in Birmingham to a loving Catholic family and raised at St. Peter’s Catholic Church in Hoover.  She received her B.A. in Communication from Auburn University and worked in public relations before going home full-time to raise her family.  Laney married her wonderful husband Gary twenty-three years ago at Our Lady of Sorrows and have been parishioners there ever since.
Their six children range in age from twelve to twenty-two. Laney describes herself as no one special and  insists she is only “a Catholic mom living a Catholic life.”

After falling away from her Catholic faith in her college years, Laney experienced a profound reversion to the Lord in her early twenties. There have been countless ways since then that He has poured graces upon Laney, strengthening and deepening her faith along the way.
Laney has dealt with struggles that have included depression, multiple miscarriages, and striving to raise a family centered on Christ and His Church. Through it all, even in the darkest seasons, God has never failed her and indeed is “able to do exceedingly abundantly more than we can ask or imagine according to His power working in us.”  (Ephesians 3:20)

The list of the many apostolates Laney has been actively involved with through the years is long. Most recently, Laney and Gary brought the Holy Spirit 101 Conference to Birmingham and formed a team to lead the ARISE Worship Ministry’s monthly Eucharistic Nights of Healing for our diocese at OLS. In addition to Catholic ministries, Laney seeks to build bridges and has a heart for unity with our Protestant brothers and sisters. She has been invited twice to be a guest on the WDJC Radio Show “A Call to Prayer” and last spring spearheaded “Gather,” a large ecumenical prayer event at a local high school football stadium in response to a series of suicides at the school.

Laney’s heart’s desire is that all people come to know of the extravagant love of Jesus Christ and have a personal encounter with Him. She thinks it is such a gift to be alive and Catholic at this time in history and believes we all have an important part to play in evangelizing and loving the lost and broken all around us.

To Him be the Glory!

Since the day is designed to speak to the hearts of women, free of distractions, it is respectfully requested that young children under the age of 14 not be in attendance.

Tickets must be purchased in advance. No tickets will be sold at the door.

At all members of Magnificat Aruba

Tickets for priests, deacons, religious brothers and sisters are complimentary.
Please call Cordilia at +297 594 9595 or email cordiliafun1108@gmail.com to reserve your ticket.  For an accurate head count, complimentary tickets must be reserved.

If you are unable to afford a ticket but want to attend the meal, please call Cordilia and arrangements will be made for a ticket to be sent to you.

UPCOMING MEALS FOR OUR CHAPTER — 2020

Remember our chapter’s commitment to Eucharistic Adoration and to pray the Rosary on the 3rd of each month for the intentions of Magnificat, Sanctity of Life, Marriage and Family, and World Peace.

[For the Diocese of Willemstad in Curacao]

Twenty one years ago, news of an organization in the Catholic Church which ministers to Catholic women was brought by a Daughter of Charity, Sr. Virginia Delaney. She spoke to her good friend, Carolyn Wright, who shared this news with her good friend, Peter Ann Ryan. They prayed for discernment about the possibility of this organization being made available to the women of Alabama, where the Catholic Christian population was only 3% at that time. Exciting, indeed, was the idea of joining women who follow the Magisterium of the Church under the authority of the Pope, who hold dear with great veneration Mary, the mother of God, and who more importantly promote the Holy Spirit, the third person of the Blessed Trinity. Trusting it would be in God’s will, the little cenacle continued to pray, adding a few more faith-filled women the Lord sent.

These prayer warriors persevered out of obedience to the protocols of the Magnificat ministry founders and the circumstances of the diocese in Alabama. In the Lord’s good time, a new shepherd of the Birmingham Diocese was finally appointed, and he explained that he needed a year to get to know his flock. Exactly one year later, he requested 6 more months of reflection and evaluation before he received the women seeking permission for Magnificat, a Ministry to Catholic Women, to be formed in this diocese.

During more time of prayer, many physical efforts were required to determine if the women of the diocese were willing to embrace the vision of this ministry and to step forward in service of such an undertaking. The first Magnificat Prayer Meal in Alabama took place on February 17, 1996 with Sr. Briege McKenna as our speaker and 500 women in attendance. The rest is history in God’s grace.

Magnificat – A Ministry to Catholic Women

Cordilia Fun Jagershoek the founding Coordinator of the Maria Strea di Speransa Magnificat Chapter, currently serves as a member of the Central Service Team’s Communication Ministry Team and the Southeast Regional Team. Reflecting on the creation of the Birmingham Chapter, Carolyn exclaimed, “The formation of this chapter of Magnificat was nothing short of amazing! It is more than any of us ever imagined or hoped for! It has brought forth fruits of love for The Trinity and Our Lady, as well as support of the Church and her priests. Magnificat Women come together, not only as friends, but as sisters in the Lord.”

Peter Ann Ryan, a close friend of Carolyn, became the first draftee in the discernment process concerning the Magnificat Ministry. She joyfully reminisces, “Over these twenty years, I am still astounded by the gifts of the Holy Spirit as He reveals His plan of love, encouragement and affection in the response of those coming to Magnificat. The awesome “coincidences” that occur between and among faith-filled women, prove the presence of a good and gracious God … touching and uplifting His children.”

The first Magnificat Prayer Meal in Alabama was held at Our Lady of Lourdes Catholic Church in Birmingham on February 17, 1996 with Sister Briege McKenna, O.S.C. as the speaker. There were 500 women in attendance. Olga Coburn, who has been on the service team since its inception, also participated in this first meal. Using her gifts of leadership in the Charismatic Renewal, Olga was delegated by the Lord to give His word to the women at the Magnificat Meals. With a grateful heart, Olga proclaims that, “My joy is from being the Lord’s instrument, especially in Magnificat, to pronounce His prophetic word to the women He has called to be present.  From the beginning He has blessed this ministry, which became manifested on that first breakfast with Sister Briege proclaiming His works and healing, including my right hand. Through His Mother, Mary, He continues to bless and use women to further His Kingdom.”

Magnificat events are held four times a year on or near a feast of Our Lady. The program includes a shared meal, praise and worship led by music volunteers, a speaker who shares God’s work in her life, intercessory prayer and the availability of the Sacrament of Reconciliation at the end of the gathering. Kathy MacInnis, current Coordinator of the Magnificat Central Service Team says, “At each meal, a woman gives her testimony of how the Lord God has touched her life in an extraordinary way with His grace. The women in attendance come to understand that what God has done for that speaker, He can also do for them. This is a source of freedom and empowerment!” This witness of God’s action and mercy in the speaker’s life focuses on hope in the midst of adversity and brings to life the scripture quote: “They conquered him by the blood of the Lamb and by the word of their testimony.” Rev 12:11

The Service Team of Mary, Woman of Faith Chapter invites and welcomes the women of the Birmingham Diocese to come and experience Mary’s Visitation to Elizabeth. Attend a Magnificat meal, a place where Jesus touches hearts. It is also a place that feels like “going home,” where everyone is loved and accepted by other like-minded women looking to become closer to God.

On February 6, 2016, the Birmingham Chapter of Magnificat celebrated its 20th Anniversary at Our Lady of the Valley Social Hall in Birmingham with our spiritual advisor, Bishop Emeritus David E. Foley, as our speaker. Bishop Foley’s love and devotion to the Blessed Mother is emphasized in the following prayer he has written, “O Mary, Mother of Christ and Mother of our Catholic Church, may all women of the world take you as their model of what it means to be a woman. May you, who are Woman of Faith, lead us by the power of the Spirit to a new evangelization of the world. Amen.”

Since its humble beginning in New Orleans in 1981, Magnificat has become an international outreach to women that has touched thousands of lives. It has spread to 105 chapters encompassing the United States, the Caribbean Islands, Canada, Malta, Poland, Ireland, Dominica and Uganda.