We welcome you to the web page of the Lincoln, Nebraska  Morning Star Chapter. These are exciting times that we live in and Magnificat was begun in 1981 for such a time as this. There are now over 100 chapters throughout the United States and its territories and in many foreign countries.

Due to the coronavirus, check here periodically for updated information regarding future Meals & Events

As of now our next Meal is scheduled for August 8 at Hillcrest Country Club, and God willing all will fall in place for us to go forward with it.  We will Keep you informed as we know more.

We are all joined in prayer with you that you stay safe and healthy through all of this.

Hosted by the Morning Star Chapter of Magnificat

Father Wylie was our Speaker at our February Prayer Breakfast. 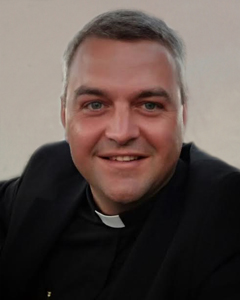 Father Justin Wylie is the first of three children born in Bedfordview, a suburb of Johannesburg, in South Africa. His siblings have moved to the US to raise their families; his sister to Dallas Texas and his brother to Phoenix Arizona. His mother remains in South Africa.
Father Wylie practiced as a trial attorney, an Assistant District Attorney, a Supreme Court Judge’s Clerk and also served a clerkship in the Office of the Prosecutor in the United Nations Criminal Tribunal. After a legal career in South Africa, Father Justin Wylie received his priestly formation in Rome and was ordained a priest in 2009 for his home Diocese of Johannesburg. (He was the first South African candidate accepted at Almo Collegio Caprania in Rome, the world’s oldest seminary, and was a Deputy Master of Ceremonies for the Papal Basilica of St Mary Major in Rome.) The Abbey of Our Lady of Fontgombault in France had the most profound influence on his spirituality and ecclesiology Father Wylie said.
Since 2017, Father Wylie has served the Diocese of Lincoln as Parochial Vicar at the Cathedral of the Risen Christ, Assistant Diocesan Master of Ceremonies, and a teacher at Pius X High School; currently he serves as Rector of the Cathedral

UPCOMING EVENTS FOR OUR CHAPTER — 2020

Remember our chapter’s commitment to Eucharistic Adoration and to pray the Rosary on the 5th of each month for the intentions of Magnificat, Sanctity of Life, Marriage and Family, and World Peace.

In late 1993, Mary Harper saw a show on EWTN about Magnificat. She made an inquiry and received information about starting a chapter in Lincoln. Mary shared this information with a Prayer Group that was meeting in the basement of St. Mary’s Church downtown Lincoln Ne. In 1994 about 20 women came together and started praying on regular basis to determine if the was God’s will to start a chapter. After discerning it was, five women were chosen to be on the first Service Team. They were, Joan Campbell, Betsy Dalton, Mary Harper, Marian Kozisek, and Carolyn May.

Father Nicholas Baker had bee praying with group at St. Mary’s and the five asked if he would be their Spiritual Advisor. He joyfully agreed and requested Bishop Bruskewitz to approved a chapter in the Lincoln Diocese. Bishop Bruskewitz prayed and reviewed the information and appointment was set for Mary Harper and Father baker to meet with him. In 1995 a letter of approval was given by Bishop Bruskewitz .the Group of twenty plus women prayed further and it was decide the chapters Marian would be the Morning Star chapter.