We welcome you to the webpage of the Mary, Queen of Heaven and Earth Chapter in Stark County, Ohio. These are exciting times that we live in and Magnificat was begun in 1981 for such a time as this. There are now over 100 chapters throughout the United States and its territories and in many foreign countries.

Hosted by Mary, Queen of Heaven and Earth Chapter

MASS
There will be an optional Mass at 8:00 a.m. at Our Lady of Perpetual Help Chapel
(The Walsh University Chapel).

We do not assign seats so arrive early to check in at the Reservation Table and find seat(s) before the program begins. 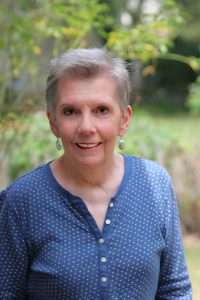 Micky arrived a bit unexpectedly in Steubenville, Ohio. A footling breech, initially diagnosed to be a Caesarean delivery, thanks be to God, mom and baby survived the experience amid the most difficult of circumstances. She has one sister, two years younger.

She lived most of her childhood near East Canton, Ohio. The family worshiped at the local Methodist Church. Her father struggled with alcohol addiction all his life.  Raised Catholic, it was not unusual to see him with both the Catholic and Protestant Bibles as he spent hours in Scripture study. Sadly, he took his own life in 1971, a few months after she turned 21.

After high school graduation, Micky worked at the Timken Company, and later WOIO [now Living Bread Radio] and WHBC, as a copywriter and voice-over personality. With the encouragement of her vocal coach and modeling instructor, six months of savings and a place to stay, she set off for New York City, confident her writing or singing would put her on the path to success. Her stay in the Big Apple lasted one week. God had other plans.

In due time she realized the Divine wisdom in her return home. Greg, who had been a good friend for a couple of years, was meant to be more. Together they took the leap in July 1972. Next month will mark 50 years of marriage.

Following the birth of their daughter and son, Micky volunteered with the local childbirth association and other not for profit organizations. She also served as Director of ADD Partnership of Ohio, work that eventually led to service as a child and family advocate with Stark County Family Council. After six months of back and forth with the Lord, she resigned from that position to follow the leading of the Spirit: “Will you start a women’s bible study at St. Paul and will you write for me?” Less than eighteen months later her one act play, Come to the Stable was published.

She was a member of the first Service Team for Magnificat of Stark County. She and Greg cofounded and incorporated Affirmation Ministries in 2003. In 2009 she received her certification as a spiritual director from the Ignatian Spirituality Institute at John Carroll University in Cleveland.

A series of health issues brought significant change to her life in the fall of 2016. Deeply humbled by the turn of events, she has persevered through these recent years of challenges by keeping her eyes on Jesus as she trusts in the love, mercy, and grace of the Lord to light her path.

“God in all things . . . God works all things together for those who love Him and are called according to His purpose . . . God is good, all the time.” These scriptural truths are just a few of those that sustain her day-to-day.

Her beloved husband Greg, family, writing, and granddaughter are her greatest joys.

Religious books and CD’s may be available at the meal.

Since the day is designed to speak to the hearts of women, free of distractions, it is respectfully requested that young children under the age of 14 not be in attendance.

Tickets must be purchased in advance to secure your reservation.  No tickets will be sold at the door.

Mail-In Reservations – $25 (your check will serve as your receipt)
Please complete the Registration Form and include the names and phone numbers of other ticket holders in your group.
MAIL-IN REGISTRATION FORM

Mail the Registration Form and a check for $25 per person to “Magnificat of Stark County” to:
Sally Kohring
4205 Cleveland Ave. SW
Canton, OH 44707

UPCOMING MEALS FOR OUR CHAPTER

Remember our chapter’s commitment to Eucharistic Adoration and to pray the Rosary on the 24th of each month for the intentions of Magnificat, Sanctity of Life, Marriage and Family, and World Peace.

Community of Praise Charismatic Prayer Group
Meets on the 2nd Monday of the month at 6:30 p.m. at the Our Lady of Perpetual Chapel at Walsh University.  Contact Rosemary Pfiffner.

To be added to our Mailing list, send an email to  Magnificat.Stark@gmail.com or call Rosemary Pfiffner at 330-499-9371.

HISTORY of Mary, Queen of Heaven and Earth Chapter of Magnificat

[For the Diocese of Youngstown in Ohio]

Stark County Magnificat Chapter was established December 8, 2000 on the Feast of the Immaculate Conception.  It was licensed officially a chapter by the State of Ohio on August 31, 2001.  The first breakfast was held on December 1, 2001 at the Shady Hollow Country Club.  Ruthanne Plas was the Foundress of this chapter.

Our Chapter began to hold its breakfasts at Walsh University in North Canton in 2005.  The Spiritual name “Mary Queen of Heaven and Earth” was added in 2008.

Mary, Queen of Heaven and Earth Chapter held its last breakfast on December 16, 2012.  It remained a chapter but was inactive for 2 years.  After a lot of prayers and discernment about reactivating the chapter, it was reformed in 2014 under the leadership of Shirley DeOrio.