Magnificat is a private association of the Christian faithful under the jurisdiction of the local ordinary. (Canon 305.2)

The highest governing body of Magnificat is known as the Central Service Team (CST).

The CST fosters unity among the local chapters and service teams. While allowing for legitimate diversity, the team in union with the bishops of the dioceses to which Magnificat has spread, preserves the integrity of the Magnificat ministry. It also coordinates the expansion of Magnificat by enabling the affiliation of new local chapters, establishing policies and procedures while providing direction and leadership to the entire membership. 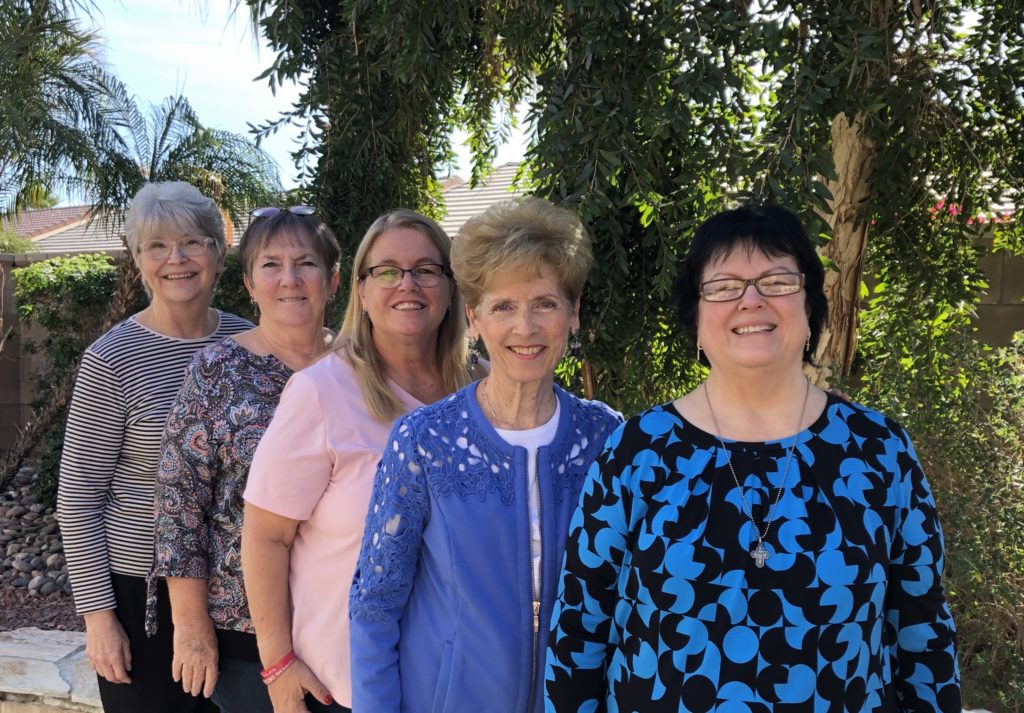 Donna Ross (California) is a cradle Catholic who strayed from the Church for many years before she realized what she was missing! A powerful call of the Holy Spirit brought her back to the Church with a new appreciation for her faith. She ended a 25-year career with the Magic Kingdom of Disney in 1994 to work for the Eternal Kingdom of God. With numerous skills developed in the workplace and enriched by the Lord’s grace, she was called into full-time ministry in His beloved Church.

She has shared her conversion of heart on programs such as St. Joseph Catholic Radio, Wordnet’s “From Kingdom to Kingdom” and Women of Grace®. In addition, she hosted the “Magnificat Proclaims” radio series featuring testimonies of Catholic women from around the world. Donna attributes 48 years of praying for her father as being key to his reconciliation with the Catholic Church and says never give up HOPE! … for God all things are possible! Matt. 19:26

Donna has been a leader in the Southern California charismatic community, founded the Palm Desert Magnificat Chapter, and currently serves as Coordinator of Magnificat’s Central Service Team. She received the Diocese of San Bernardino’s “Our Lady of Guadalupe Award” for using her God-given talents for the sake of God’s children. Donna is a woman led by the Holy Spirit whose testimony truly proclaims the greatness of the Lord and how His gifts are present in our daily lives!

Sara Ford (Nevada) had attended Magnificat Meals in California and when she moved to Las Vegas, she just assumed there would be a Chapter there for her to join. When there wasn’t, Sara made it a top priority of forming a Chapter in Las Vegas. She has diligently been working on the desire of her heart since 2008. We can all add our prayers to hers for the bishop to approve the statutes to form a Chapter there.

Sara has been actively involved with Magnificat anyway, serving on the CST Communications Team, Regional Service Team member for Region 1, and CST Chapters in Formation ministry (West). She was invested into the Equestrian Order of the Holy Sepulchre of Jerusalem last year by Cardinal Grand Master Edwin O’Brien. Sara is married and has a son and two granddaughters also living in Las Vegas.

Magnificat is delighted to welcome Sara to this new role and I know you join me in giving her a holy hug!  We look forward with great anticipation to meeting her in person at the International Conference in October.

Mary Wilson (Louisiana) is a native of New Orleans who now resides in Catahoula Parish, Louisiana. She and her husband, Ronny, have been married since 1972. They have three grown and married children and have ten grandchildren. She attends St. Gerard Catholic Church, a mission church in the Diocese of Alexandria, LA.

Mary became involved in the Charismatic Renewal in 1998 and since then, she has attended Apple of His Eye Prayer Group in Marksville, LA where she leads the music ministry. Mary is a past chairman and the current secretary of the Catholic Charismatic Renewal Committee (CCRC) of Central Louisiana. She was a founding member of the Service Team for CENLA (Central Louisiana) Magnificat – Our Lady of Prompt Succor Chapter where she currently serves is part of the music ministry. She jokingly says that she’s done everything but serve as treasurer, that God knew what He was doing when He kept her from having to count money and balance a checkbook.

Retiring after a 29-year career in education, she spent half of her career as a teacher and coach at the middle and high school levels and the other half as a high school administrator serving as assistant principal and then as principal – all in the Avoyelles Parish system.

She is the current secretary for the Central Service Team — the governing body for Magnificat, A Ministry to Catholic Women — an International Ministry for Catholic Women, a position she has held since January 2016.

In May 2018, Mary was appointed to the National Service Council for the Charismatic Renewal in the US as representative for Magnificat.

Kim Rodriguez-Torres (Florida) is a wife, mother, grandmother, and woman of God. She has been involved in different areas of Ministry for the past 30 years. She is a Commissioned Lay Ecclesial Minister, Certified Advanced Catechist, Retreat Facilitator, Prayer Group Leader, and Evangelist. Worked as a Catholic School Teacher, Representative of Family Life, and MOM’s Ministry.  Assisted on the Board of the Catholic Charismatic Renewal for Orlando and the Archdiocese of Miami. Kim is presently on the Central Service Team for Magnificat, the governing body for this World Wide International Ministry to Catholic Women. The Magnificat ministry was born out of the Charismatic Renewal open to the working of the Holy Spirit in sharing their love, service, and the good news of salvation.

Kim is the founder of “Bella’s Blanket of Blessings” a prayer blanket ministry that was started after her 4-year-old niece and goddaughter; Bella, became paralyzed and was diagnosed with stage 4 cancer.  These prayer blankets are for the sick, suffering, and anyone else who needs prayer. These blankets have gone around the world to Canada, Haiti, India, and the Dominican Republic. They have been sent to hospitals, nursing homes, homeless shelters, priests, and seminaries. Bella’s Blanket of Blessings helps promote vocations to the priesthood through prayer and spiritual adoption of seminarians and priests.

Kim is willing to share the power of prayer, the love of God, and the mission of Christ any chance she gets.  When you realize what happened on the Cross was done out of love for you it changes your life forever. “God is love.” 1 John 4:16  and she strives to do all in love for the greater glory of God.

Jackie France (Ohio) was born in rural Indiana, raised and schooled Catholic, but fell away from the faith in her college years. God brought her through a variety of relationships and personal journeys back to Jesus, His Church, and His Sacraments. It became evident that her years of working in secondary education and addiction counseling were used by God to form her for His purpose in her family, parish, Bible studies, prayer groups, and Magnificat Ministry.

Jackie has been a Magnificat servant leader since 1998 when Stark County Ohio Magnificat Chapter was in formation. In 2008, Jackie resigned from that Service Team after serving various times as Coordinator, Assistant Coordinator, Secretary, and Treasurer to be the CST Region 6 Representative from 2008 to 2015. In 2016, she became Chairperson of the CST Regional Representative Ministry and then accepted the call to be CST Historian in 2018. She is the CST Liaison to the Regional Ministry for Active Chapters.

Jackie is a widow living in North Canton, OH. She has one son, three stepchildren, eight grandchildren, and one great-granddaughter who are evidence of how greatly God has blessed her.